What a difference a harness makes?

Two contrasting stories appeared in our news feed this month and provide a stark and valuable lesson in the simple, life-altering use of a harness when using a man bucket or work platform.

In 2015 in Richmond, Virginia tree felling business owner Mike Witt (45) fell five meters when a tree top he had been felling swung back around and knocked the platform he was working from. He was ejected from the platform and sustained serious injuries to his neck and back, causing paralysis from the waist down. 18 months later Mike continues to rehabilitate and has partially recovered movement in his hands and arms. Mike has had to sell his business to pay for his medical expenses. 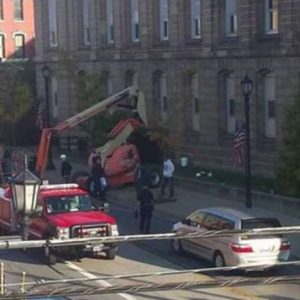 The scene in Ohio once both men were safely back on the ground.

This October two men were conducting an inspection on building work being done to the  Huron County Court House in Ohio, USA. They were on a platform at the end of a boom, which was protruding over a road. They didn't notice a large truck coming towards the boom, which then clipped the platform causing the boom to swing violently. Thankfully both men were wearing harnesses, attached to the platform with lanyards. Despite losing their hardhats and suffering injuries to their ribs and faces, both men walked away from the incident, shaken and largely unharmed.

These cautionary tales should be a warning to anyone who takes simple safety measures for granted. Never think that a quick trip up to inspect something or conduct routine work can be harmless and requires no harness. No matter how simple the task always wear a harness and lanyard no matter what. Safety, after all, is a matter of habit not luck.

Take care out there.

View all posts by: Susannah Holz